Pens. They are everywhere. Hundreds of millions, placed haphazardly about the world over, there is nothing less suspecting than a ballpoint pen.

This is what makes pen spy cameras some of the most effective cameras for doing sting operations, getting confessions, doing secret interviews, or just about anything that requires secret recording.

Sure, you can try doing the subtle smartphone record, but this usually only works for audio as it is hard to point a phone at someone’s face these days without them suspecting, and the days of the old-fashioned miniature spy camera seem to be fast disappearing.

A pen, positioned ever just so in a shirt pocket is the perfect undercover accessory for business or formal attire. 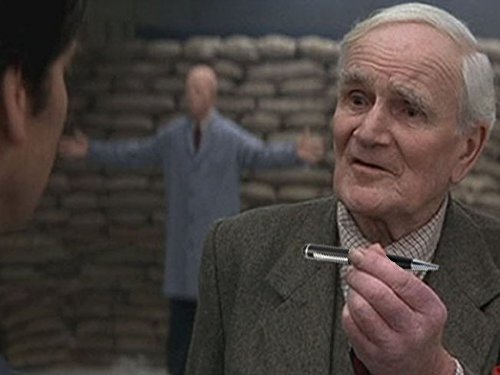 The key things we look for when judging quality pen cams from the rest are:

With all of these taken into consideration we have determined the Multifunction Hidden Camera Pen Bundle from FabQuality to be the most bang-for-your-buck setup currently available for consumers. 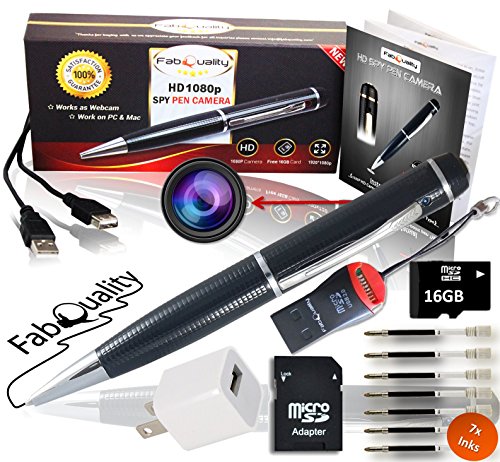 First, let’s make sure it meets our criteria. Does it look like a real pen? With a full black plastic body accented with a chrome tip, chrome mid-band and stylized chrome clip this pen is just like all of the other “executive” pens out there.

Second, does it write? Yes, this is a fully functional pen. The bundle here comes with 7 replacement cartridges as well, so you can use this for at least a year for both covert operations as well as actually taking notes.

*It is important that a spy pen be able to actually write in case the subject, or a third party happens to ask to borrow the pen.

Finally, does it record in HD? Most certainly! The stealth pen cam from FabQuality records in full 1080p HD (with audio) at 8 megapixels with a super tiny camera. Frame rate is a solid 30 FPS. We’re talking full-sized camera quality here. 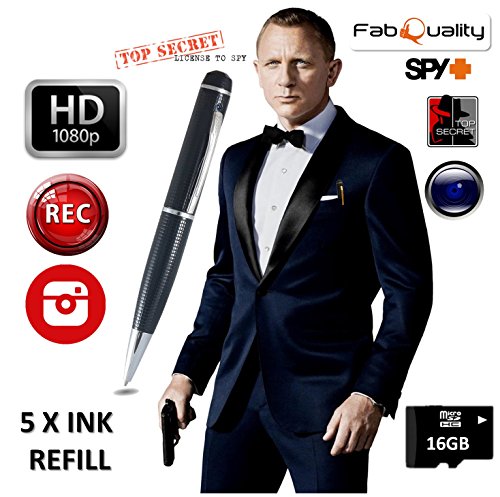 So yes, this pen checks all of the essential boxes. But what else makes it the best option out there?

Well first, it comes with a 16 gigabyte MicroSD card to record the footage (up to 32 minutes) on the pen and a MicroSD adapter/card reader so you can plug and download your footage directly on your laptop. You can buy your own larger MicroSD, like a 32gb chip if you want even more recording capacity. 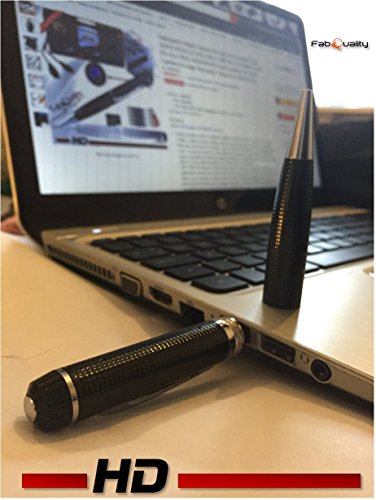 The pen also features a 1-click activation mode, so you can discreetly activate the recording function in a way as not to raise suspicion. The 220mAH built-in lithium ion battery provides up to an hour of recording, so you can get all the intel you need without having to swap devices.

This is a top quality spy pen. There are no gimmicky recording lights or sounds that could give it away, this is for serious undercover operations. Because of its small size and ubiquitous shape this is the perfect pen to wear to record a subject discreetly.

If the above isn’t quite for your liking there is one other top-dog cam pen currently on the market that might make a better alternative.

The SharpCam Spy Pen is a little bit more professional grade, although it comes at the cost of a slightly thicker overall package.

Personally, we don’t think a slightly larger pen is much of an issue. Many of the most popular executive-class pens are quite large, like Monte Blancs for example.

The body, again all black and chrome, looks perfectly at home on an executive’s desk or on an arm-rest on a business class flight.

SharpCam’s pen stands out in multiple ways. First, it has many of the same qualities as the previous mentioned pen including full 1080P HD recording (with audio), a discreet design, and the ability to actually write.

What makes the SharpCam stand out are several innovative features which make it the most versatile pen on the market.

First, this pen has built-in motion detection and auto-looping functions.

This means you can plant the pen in places where physically cannot stay to record. All you need to do is plant the pen around the subject, and he/she will eventually use it when alone, thinking they are in private. You then only need to retrieve the pen at a later time and collect your intel.

Smart motion detection and looping means you can save more memory space by only recording when you need to, and not record when nothing is happening.

This pen also has a slightly larger batter, at 260mH and comes with a larger MicroSD card at a full 32gb.

One of the best features of this pen though is the ability to plug in directly into a computer via USB to charge it, no extra cords required.

There you have it, two of the best hidden cam pens available for purchase on Amazon. Of course there are other solutions out there, and nothing beats a bit of home-made DIY spy-genuity (think Q devision, but suburban basement) but if you are in a bind and need a quick solution then these are your best bets.

License-to-Shoot is a participant of the Amazon Services LLC Associates Program, an affiliate advertising program designed to provide a means for sites like this one to earn modest fees by advertising and linking to Amazon.com.

Topics We Write About